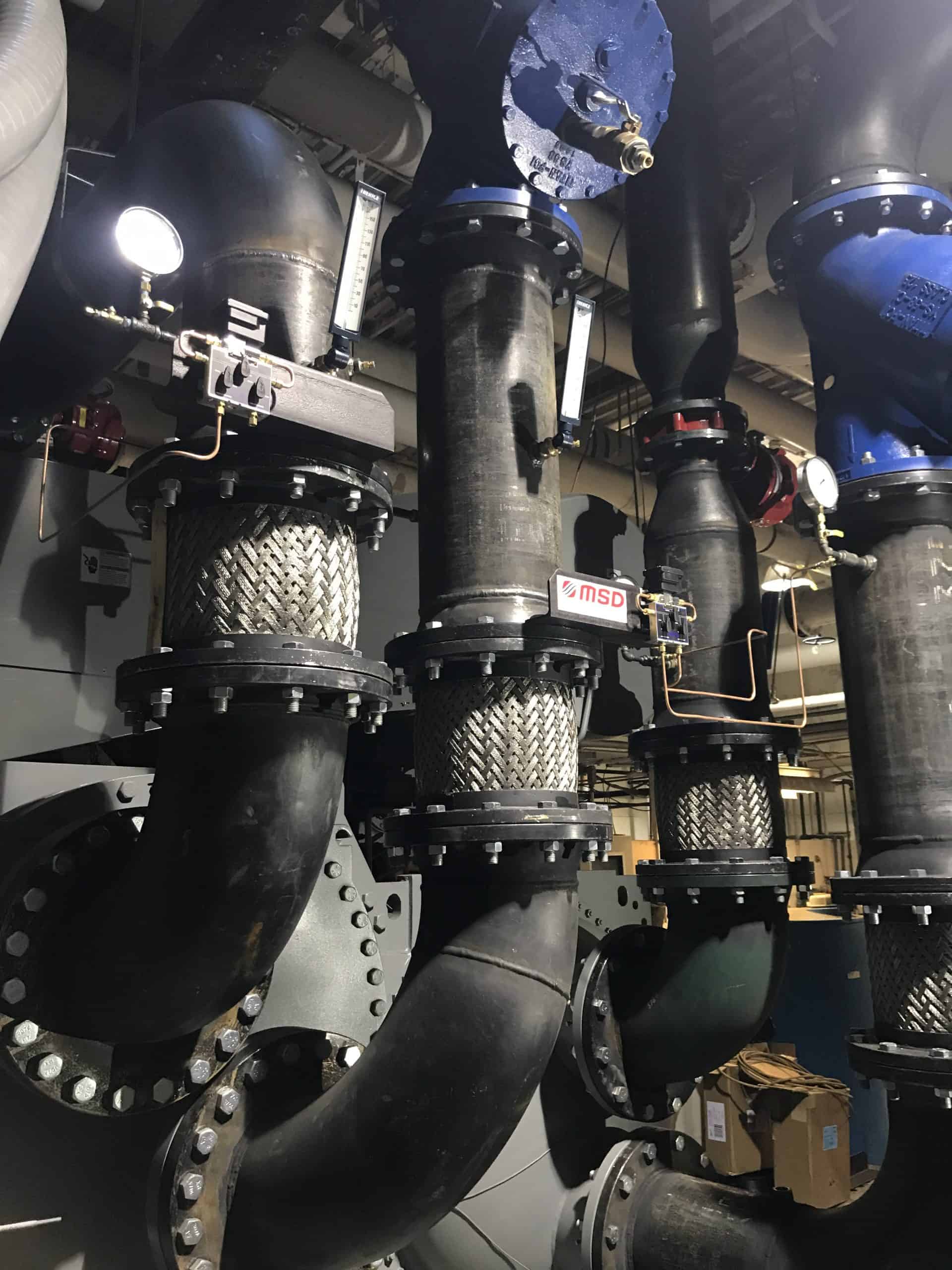 MSD Inc. entered into an agreement with Perini Management Services for the HVAC and Plumbing work on a renovation project at the WPAFB Hospital, Building 88, which had a total contracted value of over $6 million dollars.

The HVAC work that MSD completed includes the following:
• Demo and Reinstall (1) Indoor Air Handling unit along with all new Ductwork
• Renovate (3) separate areas inside the existing Hospital
• Demo and reinstall (3) chillers in the Central Energy Plant, and all the existing piping.

Most of the time we hear people say that our children are the ones that cause our hair to turn grey. However, looking back over the past couple of years, I would have to say that this project has given me a couple of grey hairs as well! We originally teamed up with a Construction Manager out of Missouri, who had organized and brought together the Architect, Engineer and all the other trades. We spent hours working through the design and were finally to the point where we could move forward on the project. We had been given a contract in January of 2018 and we had been directed to order the first chiller,which cost over $250,000. The plan was that we would start work in April of that year so that we get the first chiller installed and running before we got into the hot summer months. All the paperwork was in place and we pulled the trigger on the chiller expecting delivery in early May.

On March 16th we received an email from the Construction Manager saying that the Missouri company was “indefinitely closed for business”. Their doors were closed. They were out of business. No heads up, no warning, just an email informing us that they were done. Here we sat with a very expensive chiller on order and the contractor who held our contract just went out of business. There were a lot of phone calls and emails that went out that same day to our subs and our vendors. Here we were thinking that we had over 16,000 man-hours getting ready to start in April and suddenly all of that came to a screeching halt. All kinds of questions began to surface. Could the chiller shipment be canceled or were we going to be the owners of a 1500-ton chiller? What are we going to do to keep our crew busy? Is the project dead or is there anyway that it can move forward?

There were a couple of weeks of uncertainty on what truly was going to happen. We were able to get the chiller canceled but everyone was just discouraged. All the upfront work that had been done seemed to be slowing going down the drain as a lost cause. Then a spark of hope came to the project in early April as the bonding agent reached out to us wanting us to work with Perini Management Services to help move this project forward. Negotiations started back up and more paperwork and finally a new contract was in place allowing things to start moving forward again.

However due to the delay and the fact that most of our work was in the main chiller plant, our work had to be postponed until after the hot summer months. Even though things were moving forward, it had a huge impact our sales and our workload over those months.

I had been somewhat involved in the project up to this point, but I had not been the lead contact on the project. Now that we had a green light on everything again this project landed fully in my lap. I can remember sitting there in my office looking over the prints and it didn’t seem too bad. Replace three chillers along with the cooling towers outside and (six) pumps. Not that big of deal, right? Wrong. As I sat there and studied everything there was something that I kept rolling over in my mind as I thought about the scope of the project. Per the project scope we had to replace all the piping that was attached to the chillers and reconnect them into one common header. This work all had to be done while the system stayed up and running, m 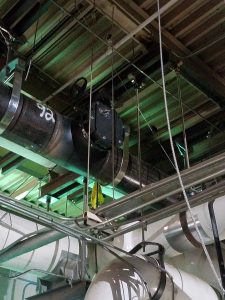 aintaining chilled water to the hospital.

Now we knew that we needed to install a new 18” steel pipe header that all of the new chillers would tie into. This header, which weighed 155 lbs/ft, had to be installed next to the existing line so that we could maintain the old system while we worked on the new one. This was not just a matter of raising this pipe up off the floor with chain falls to secure it into new hangers, no, this was more like trying to jockey this pipe into position around existing conduit and other piping lines that had to remain intact until the new system was up and running. Due to the weight of this new piping and the fact that very little of the existing system could be demolished, shoring had to be added to make sure that we did not put too much-added load on the building structure. So, the issue that we had in front of us that somehow this new 18” steel pipe that was going to be installed right beside the existing 18” pipe somehow had to be tied into the existing pipe. Where we needed to do this would require us to cut off the old 18” line and demo it out of the way and then connect our new 18” line in its place. This is 18” welded pipe. Nothing gets installed fast. This existing pipe that we needed to cut is moving up to 6000 gallons of water a minute and it needs to stay operational to keep cooling on to the hospital. With everything that we had done in the past, our options seemed very limited. Everything that we knew said that there needed to be a shutdown of the plant so that we could make this tie-in. Could this be done at night? Would the hospital allow us to shut them down fora 12-hour period of time? As we began to pursue this option, we found a major problem, there were no existing shutoff valves on these 18” lines as they leave the plant and head over to the hospital. If we drain the water out of the plant, we would also be draining the entire hospital. That was NOT an option!! We were then given a lead on a company in Cincinnati that might be able to help us. We made contact and met one of their reps on site to look at our situation and what we were needing to do. As we talked through things a solution started to come to light. It was going to require us to order some special split tees that would fit around the outside of the existing 18” line and be welded into place. We would then ship in a special hot tap drill from Texas and have their crew come in and cut a hole into the side of the 18” line with the water still flowing past. We would then use this 12” hot tap port as a temporary way to tie our new line into this existing header. This would allow us to run off the new header with the first new chiller that we installed, but at the same time have the old system still in place to back it up if our new equipment failed.

We liked the plan and decided to move forward with it even though it seemed very expensive and something we had never done before on this magnitude. This allowed us to continue switching out the other two chillers, one at a time and piping them into the new header. We finally got to the day when we had all the chillers connected to the new header and it was now time for us to connect the new header as the main line and eliminate the old header. This was the most nerve-wracking portion of this plan. It was going to require us to make another 12” hot tap into the same 18” pipe just a few feet upstream of where our temporary line was installed. Once the hot tap was complete, they would install what they called a line stop. Just picture a heavy-duty bag getting inflated on the inside of the 18” pipe, and that bag was going to the only thing in place that was going to hold back thousands of gallons of water. Sometimes our mind can go to the ‘what ifs’ in life. What if that bag failed while that 18” pipe was completely cut off and all that water rushed out of that open pipe right into the Central Energy Plant where all the Electric, Heat and Cooling for the Hospital are fed. We just couldn’t let our minds think about that.

I remember how I felt that morning at the office not really wanting to be out there watching, but having my mind constantly wanting to know what was going on. So much that I finally had to get in the truck and head out for a little bit just to watch. When I got there the bag was already inserted and our crew just finishing up cutting through the pipe just a few feet away from this inflated bag holding back all that water. I remember seeing the guy up in the lift look into the open end of the pipe, completely cut off, and being able to see that bag just a few feet away. That was a nerve-wracking day for everyone. After watching for a while, I decided it was more stressful to be there just watching. I had to leave and go try to busy myself with something else. I remember the call that simply said “We’re done. The valve is in place
and the hot tap team is leaving”.

A situation that at first looked impossible to me had been solved. The entire chilled water plant had been re-piped and tied back into the existing system without ever taking the hospital offline.